I have a new feature article (my first cover feature!) in April’s issue of BBC Sky At Night magazine, which is in the shops on Tuesday 18th March. 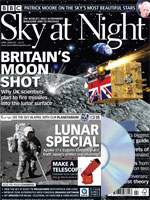 The article covers the proposed MoonLITE probe, a UK mission to send a small spacecraft to the Moon deploying four missiles to study the lunar surface. The missiles (or ‘penetrators’ as they are actually called) will impact the surface and remain there working for about a year. They will create a seismometer network as well as carry out geological and chemical analyses of the lunar surface. It’s a fascinating proposal. You can get the full story and read several expert interviews in the article.

You shouldn’t fail to miss the cover in the shops, the graphic designers and illustrators who worked on this article have really brought the story to life. So if you do spot the magazine grab a copy and find out how the UK may soon be joining the return to the Moon!

N.b. If you are in south-east England on Wednesday (19th March), at 10:30am, tune into BBC Radio Kent as I will be speaking live with Dominic King about MoonLITE. If you are in or around Cumbria I will be talking live to Ian Timms about the mission on BBC Radio Cumbria at 12:40pm the same day.