For a long time the beautiful colliding galaxies known as the ‘Antennae Galaxies’, NGC 4038 and NGC 4039, (pictured above) have thought to have been somewhat unusual, a bit abnormal if you will. That’s because astronomers had thought they were between 65 to 100 million light years away. In order for them to be this distant, astronomers reasoned, their current appearance could only be explained by several strange intrinsic properties. To understand why they appeared this way, astronomers argued that they must be undergoing tremendous star formation, with super-massive clusters of stars and even hidden bright X-ray sources. But now new observations from Hubble seem to suggest that we don’t need all these unusual attributes to describe this intriguing merger. 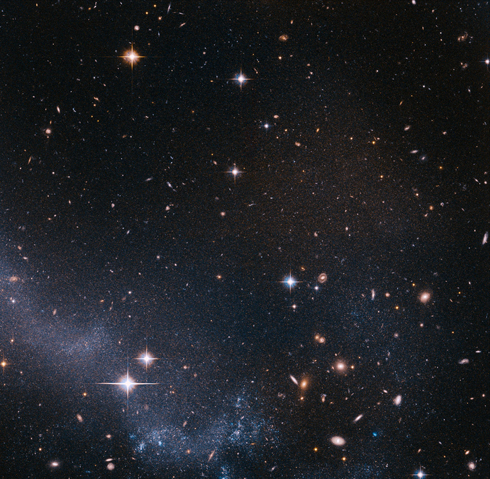 Astronomers from the European Southern Observatory (ESO) using the Hubble Space Telescope’s Wide Field and Planetary Camera 2 have found that actually the Antennae Galaxies are closer than we thought. By observing red giant stars in the tidal tails of the colliding galaxies, the astronomers found that they are in fact about 45 million light years away. The red giant stars nearing the end of their life are good for measuring distances to galaxies; as, at certain points in their life, they have a known brightness which can make them good ‘standard candles’ or distance markers. So we now know that this beautiful merging swirl confirms to our models of galaxy evolution and is in fact how we expect a galaxy merger at this distance to look.

You can read the full story here.