On the 14th July 1965 NASA’s Mariner 4 flew past Mars and kicked off humankind’s exploration of the red planet with robotic spacecraft*. In the 43 years since that event, our knowledge of Mars has grown at an incredible rate. Not only do we now know a great deal about Mars’ fascinating past but we can get daily (sol-ly?) updates from a small flotilla of spacecraft, on the surface and orbiting the planet. From those early grainy monochrome images of the martian surface we have come all the way to snapping images of our own craft parachuting to the surface; to explore in situ and see much more too. Our missions have captured images from Mars that have shown us: landslides falling down cliffs, dust devils whipping across the martian plains and have generally opened our eyes to the desolate (but stunning) world with which we have become fascinated over the centuries.

For me though one of the best things about our exploration of Mars, aside from the science, is how the images have been able to convey the beauty of the red planet. Not only from a purely aesthetic viewpoint either. The images we see put the complex scientific information we receive into a human context. A high silica content in a region of soil may mean little to anyone but a specialist. But if we can look at an image and say: “that white patch there shows that this region might once have been home to a warm pool of standing water, perhaps even with a bubbling hydrothermal vent” then the whole scene jumps to life. 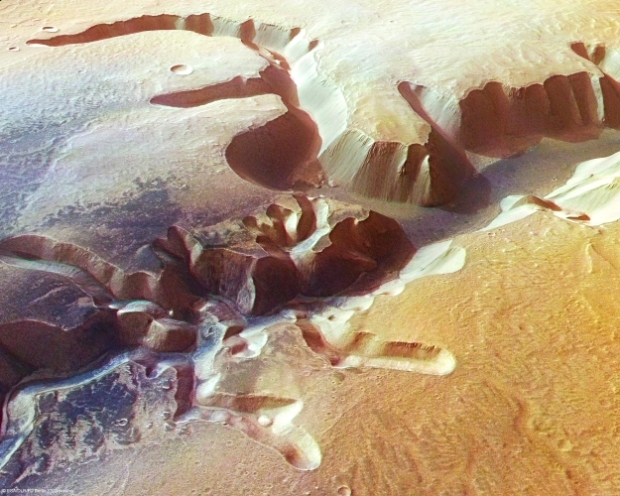 So it’s with this in mind that I’m posting this image above, one of the Mars Express spacecraft’s latest images. You can view the big version here, to get the full effect. It’s part of a region called Echus Chasma on Mars and has been shaped by all sorts of processes from volcanic events to water erosion. However my favourite quote about the image below, from the ESA news article about these new images, has to be this: “Gigantic water falls may have once plunged over these cliffs on to the valley floor. The original shoreline is still partially visible. The remarkably smooth valley floor was later flooded by basaltic lava.” The fact that we can make such an incredible comment about Mars, to me, shows just how far we’ve come from those early Mariner days.

*There is of course a grand history of observing Mars, with telescopes from Earth, that dates back many decades prior to this.