Often the most captivating space pictures come, not from looking out into the depths of the Universe, but back towards home and the Earth – our little round oasis in space. I say this particularly today in light of two images I chanced across whilst researching on the web. The first is from the brilliant Japan Aerospace Exploration Agency (JAXA) probe KAGUYA (also known as SELENE). It’s a picture of the full Earth rising over the lunar limb. It was taken a few weeks ago (September 30th) by the probe’s high definition video camera, as it passed over the Moon’s north pole, at a height of about 100km from the surface. JAXA released it today and well…see for yourself…wow! 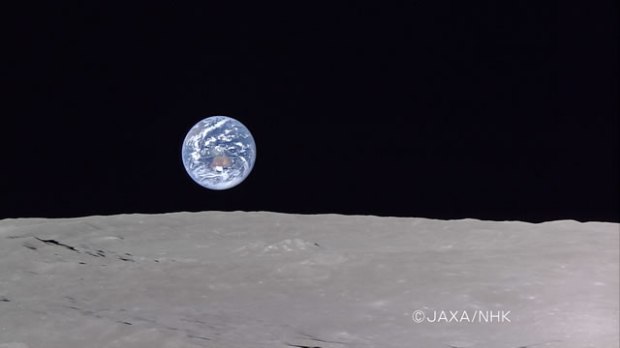 The Full Earth rising over the Moon. Credit: JAXA/NHK

In the full sized image you can clearly see Australia against the blue of the oceans and beneath the swirls of the white clouds. What I wouldn’t give to see that view with my own eyes! If you look closely I think that’s the mountainous central peak, of a vast foreground crater, you can see towards the centre of the image. It certainly looks like the centre of the bowl of a crater in reflief running through there. The images from this mission are incredible and you can see many more, as well as some amazing videos, on the JAXA site here. But if you want to feel like you are really floating with the craft over the surface then the HD camera’s video of this ‘Earthrise’ is here (video link).

Lastly then is the second image that caught my eye today – it’s the image at the top of this page (big version here). That’s a picture from the EUMETSAT Meteosat-8 satellite. That orange/white pixelated blob below-centre in the image is, incredibly, the fireball that ensued when a 2-metre wide chunk of rock entered the Earth’s atmosphere and exploded in a searing flash of light. The rock designated 2008 TC3 was picked up by astronomers several hours before it was due to hit the Earth. There wasn’t really any risk to us and the rock most likely broke up in the atmosphere high over a sparsely populated region of Sudan. It would be interesting to know if any parts of the object reached the ground, as meteorites, as they will no doubt be important given that their meteoroid progenitor was relatively well observed prior to impact.

It’s all exciting stuff and reminds us that we should always remember how cool and interesting the Earth is, whilst we are appreciating other worlds and distant places in this incredible Universe we live in.

UPDATE (11.10.08): When I was writing this last night, I completely forgot about the other story which fits nicely into this ‘look back’ theme. It’s a story from ESA’s Venus Express about how astronomers are using the craft’s spectrometer to look at the fingerprints of key molecules in Earth’s atmosphere. The reason they’re doing this is to see if Earth is habitable! Odd, it might seem, but it’s a crucial thing to be able to do if astronomers are going to have any chance of success in determining if other exoplanets are habitable. That’s because from learning about what chemical signatures represent life on Earth, we can begin to formulate some ideas of what we should be looking for on other planets. You can read the full story here.