We’ve all seen artists’ impressions that depict swirling clouds of dust and gas around black holes or tumbling rocks moving around a young star, the beginnings of a new star system. They fill our books and press releases with sumptuous colourful detail, providing an imaginary window onto what those distant locales might look like. Yet when looking at images from space, it’s often hard to make the mental leaps between what the artists’ impressions show, what we see in the images and comprehending what it really looks like. If you’ve ever looked through a telescope at the Great Orion Nebula, or even a bright galaxy like M31, you’ll know that they rarely look like the images seen in magazines or books. After all our eyes are no where near as sensitive as the cameras that take those images, gathering almost every photon, over several hours. We see diffuse patches of nebulosity whereas CCDs and DSLR cameras see stunning swirls of light.

But even if cameras show more detail than the eye, sometimes even a detailed image doesn’t always easily convey the structure, three dimensional shape or scale of an object. For example the planetary nebulae M57 (the Ring Nebula in Lyra) and the southern hemisphere Helix Nebula appear as 2D rings visually through the telescope and in Hubble images; yet they are in fact more like gargantuan cylinder/rugby-ball shapes (or ‘prolate spheroids’ to use a more accurate term). And the famous ‘Pillars of Creation’ aren’t one flat 2D region of nebulosity but are actually at differing distances from us within their parent nebula. Have a look at the way each pillar is illuminated and you begin to see a new perspective of these fascinating structures.

I’ve always thought the X-ray images of the centre regions of the Crab Nebula give a really good idea of what’s happening at the supernova remnant’s heart; and this new X-ray image from the Chandra X-ray observatory (below) really brings that home. 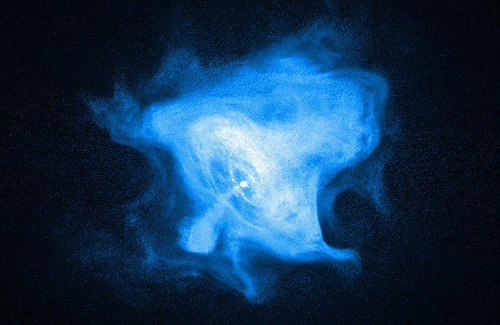 The heart of the Crab Nebula in X-rays. Credit:NASA/CXC/SAO/F.Seward et al.

That bright white dot at the heart of the swirling blue region is a pulsar. It’s all that is left of a massive star that died when it went supernova. The pulsar is made of a rapidly spinning neutron star with two radio jets pointing out of its magnetic poles. If you look closely you can see a small bright ring around the pulsar. That’s a huge shock wave that has been created as electrons and positrons smash into the gas around the pulsar. As the positrons and electrons interact with the cooler nebula and the magnetic field of the pulsar they are shepherded and swept around, before radiating X-rays, creating the eerie loops and swirls seen around the main shockwave. The zombie like magnetic field of the star (that died to form the pulsar) might also be having an effect from beyond the stellar grave; as it’s thought to be creating the darker intrusions into the nebula seen towards the bottom right of the nebula. It’s an incredible image and even more incredible when we consider what we are really looking at. If you want to see the full resolution image visit the great new Chandra X-ray Observatory website here.