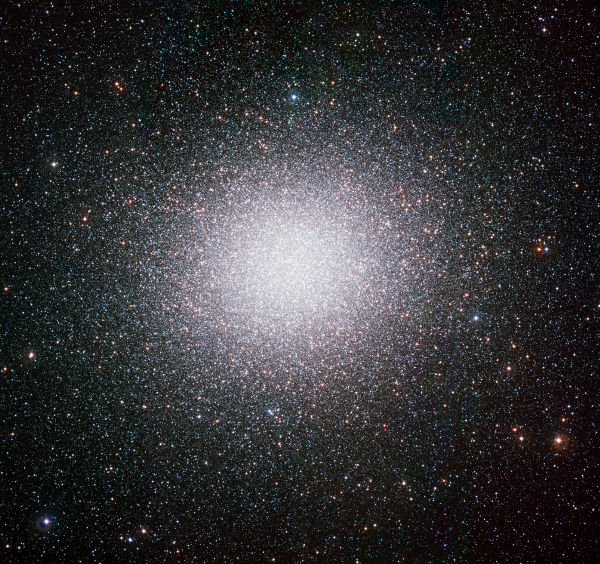 Omega Centauri as seen by the WFI. Credit: ESO/EIS

I’ve just had a new press release published over at the European Southern Observatory’s website. It’s about an image (above) of the stunning globular cluster Omega Centauri, taken with the observatory’s Wide Field Imager camera. Here’s a snippet from the release:

This new image is based on data collected with the Wide Field Imager (WFI), mounted on the 2.2-metre diameter Max-Planck/ESO telescope, located at ESO’s La Silla observatory, high up in the arid mountains of the southern Atacama Desert in Chile. Omega Centauri is about 150 light-years across and is the most massive of all the Milky Way’s globular clusters. It is thought to contain some ten million stars!

Omega Centauri is roughly 12 billion years old and had long been thought to be just a massive globular cluster – a huge, roughly spherical, collection of ancient stars. But recent research has found that there are several generations of stars in Omega Centauri – not a typical trait of globular clusters. This discovery has led to some astronomers suggesting that the cluster is actually the remnant centre of a dwarf galaxy. You can read the full story here. And be sure to have a look at the high resolution image, to get a real sense of perspective, with the millions of stars in the cluster. I’ve included a small crop below.

A crop of the left hand side of the new WFI image. Credit: ESO/EIS