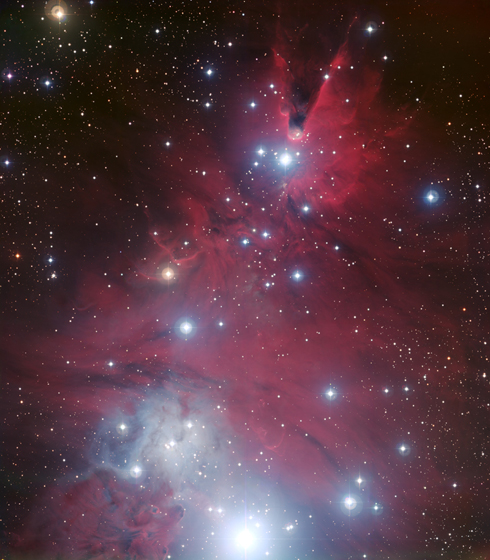 Sometimes it’s nice just to sit back and revel in the countless images that are produced by the world’s observatories, be they in space or on the ground. It might be a friend’s ‘amateur’ astroimage one day and a celestial scene from Spitzer the next. Despite the title of my previous talks, we all love a good pretty picture.

With this thought in mind then, here’s a newly released image from the European Southern Observatory of NGC 2264 — an object that contains the festively named Christmas Tree cluster. The cluster, made of young blue stars, is surrounded by an enormous star forming nebula. The startling rich ruby colour of the nebula is coming from the glowing hydrogen gas that is being excited by ultraviolet radiation, from the young (bluer) stars within the cluster. Sitting atop the ‘Christmas tree’ is the object astronomers call the Cone Nebula — a huge tower of cool gas that protrudes into the main nebula. The Cone Nebula has been observed many times before, perhaps most notably by the Hubble Space Telescope.

Scientifically, there are loads of interesting facets to this region from stellar families to signs of jets from infant stars (called Herbig-Haro objects) and even dust being gently corralled by starlight. Mainly however, this image has been released just for us to enjoy. You can read more about the NGC 2264 region (and download some very large versions of the image) from the ESO website here. For now though, let me take this opportunity to wish everyone a very safe and enjoyable holiday and a successful International Year of Astronomy in 2009!