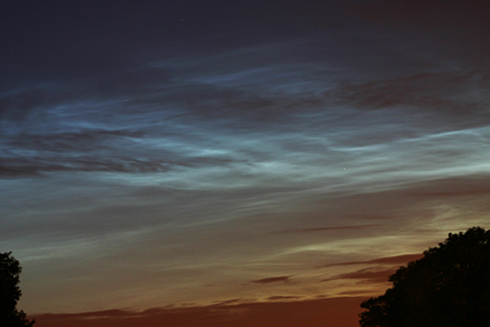 A stunning noctilucent cloud display seen in the summer of 2009. Credit: Will Gater

It’s approaching that time of year when the skies of the northern hemisphere are graced by an ethereal phenomenon known as noctilucent clouds (or NLCs). These high altitude clouds of ice crystals shine long after the Sun has set and are visible from latitudes of around 50 to 60 degrees north during the summer months. They are beautiful to look at, glowing a bright blue/white colour against the reds and oranges of the twilight. We had some wonderful displays last summer and I’m hoping that this year they’ll put on a good show too.

Late last year BBC Radio 4 announced that they would be holding a new competition ‘So You Want To Be A Scientist?’ to find the BBC’s Amateur Scientist of the Year. People from around the UK submitted their ideas for scientific experiments they’d like to carry out, with the four best now being put into practice with the assistance of professional scientists. The finalists will be judged later this year at the British Science Festival to see who wins the coveted title.

I mention this because one of the finalists, aerial photographer John Rowlands, will be studying noctilucent clouds for his experiment, with the help of Professor Nick Mitchell from the University of Bath. You can read (and hear) more about John’s idea and the science behind noctilucent clouds on the Radio 4 website here. There’s also a Facebook page where John and the Radio 4 team are keeping everyone up-to-date with how the project is progressing. It should be a really interesting experiment to follow over the next few months, not least because the subjects of the study are so fun to look at and photograph.