This afternoon, 21 million kilometres from the Earth, NASA’s EPOXI mission flew by Comet Hartley 2. In the process, it captured some of the most stunning close-up pictures of an active comet ever seen.

Hartley 2 as seen by the EPOXI mission. Credit: NASA/JPL-Caltech/UMD

Hartley 2 has been visible in the night sky for many weeks now, and there have been some stunning images, taken by amateur astronomers, of its visit into the inner Solar System. While they have their own beauty, none can compare to the remarkable pictures sent back today by EPOXI. They show the 2.2km wide nucleus of the comet, from a distance of around 700km, covered in what look like boulders and effervescing with great jets of material erupting from its surface. 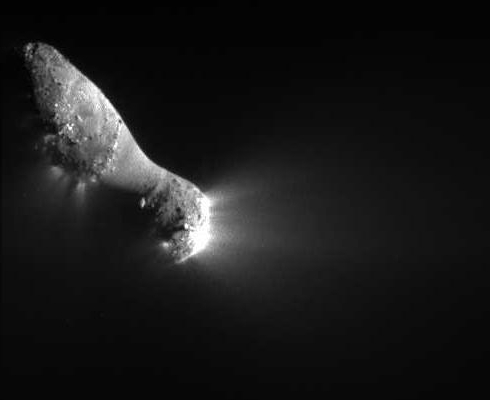 Some might think of the Solar System we live in as a rather quiet unchanging place, where nothing happens for eons. Well, these stunning images help refute that idea very easily. This is partly why I particularly like the image below, showing the jets bursting into sunlight. It really shows how dynamic these fascinating objects can be.

Tomorrow night we’ll be celebrating Bonfire Night here in the UK, where tradition dictates that we let off fireworks and light bonfires. For me though, that manmade spectacle won’t be anywhere near as impressive as the truly awesome natural one we witnessed today.