Over the coming week the 2010 Geminid meteor shower gets underway, building up to a peak which is expected on the morning of 14 December. I thought now would be an ideal time to repost a few excerpts from the blog post I wrote about the shower last year. 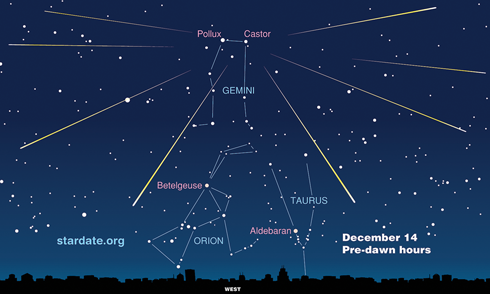 The position of the Geminid meteor shower radiant (see text below), in relation to the surrounding constellations. Click the image for a larger version. Credit: StarDate magazine. Used with permission from The University of Texas McDonald Observatory

The best time to look for the meteors will be on the night of the 13/14 December. How many you’ll see depends on several factors, such as your local light pollution levels and the cloud cover. Steve Owens has a great post about this here, where he explains how to calculate the number of Geminids you can expect to spot from your viewing location. Meanwhile, here’s what I had to say about the Geminids this time last year:

“Meteors are produced when tiny pieces of space dust enter our atmosphere at enormous speeds. As they do the air ahead of them is compressed violently causing it to heat up. This tremendous heat in turn makes the meteor glow as it streaks across the sky. It’s amazing to think that the average meteor is created by a piece of celestial detritus no bigger than a grain of sand.

Ordinarily on a clear dark night you might see a handful of meteors every hour. These are known as ‘sporadic’ meteors as they don’t belong to a particular shower. However when a meteor shower is underway there’s a good chance you’ll see many more, as the shower is supplementing the handful of sporadic ‘shooting stars’. 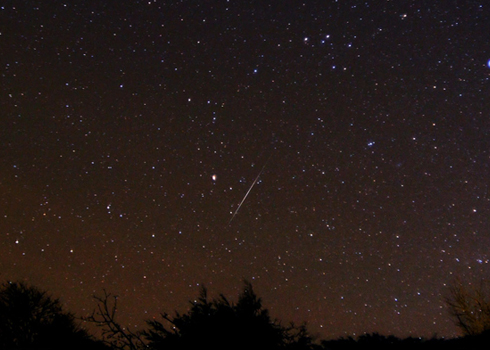 A meteor from the 2009 Geminid meteor shower darts through the constellation of Hydra, close to the star Alphard, as captured by Pete Lawrence. Credit: Pete Lawrence

Meteor showers occur when the Earth passes through a trail of debris left by a comet as it passes through the Solar System. The particular object that creates the Geminid meteors measures around 5km in diameter and is known as 3200 Phaethon. It was found in the early 1980s and is in fact designated as an asteroid, though it certainly has some cometary traits. Perhaps, some have argued, it is a ‘dormant’ comet.

If you go out over the next few nights and see any meteors you’ll know you’ve spotted a Geminid if it appears to come from a point in the constellation of Gemini. This point is known as the ‘radiant’. The constellation that the radiant is located in gives the meteor shower its name; so the Geminids come from Gemini, the Orionids come from Orion etc.

In terms of where to look, my advice would simply be to look up. Gemini is high in the sky over the next few nights at around 1:30am, and with the Moon out of the way later on in the evening, we’ve got some good observing conditions for this year’s shower. Wrap up warm and sit back in a sun-lounger if you can, as this should stop your neck from getting tired and give you a better, more comfortable, view of the sky.

Meteor showers like the Geminids are a great chance to get together with friends to observe too, as the more eyes the better. You can join in with the special Geminid ‘Meteorwatch’ event on Twitter by tagging any Geminid meteor observations you tweet with the hashtag #meteorwatch.”