The skies were mostly clear in southern England for the peak of the Perseid meteor shower last night. Here are a few pictures that I captured of the display from the countryside to the east of Bristol.

A brilliant Perseid fireball streaks across the sky. Credit: Will Gater

The same fireball image as above animated together with the previous and following frame to show the presence of a ‘persistent train’. Credit: Will Gater 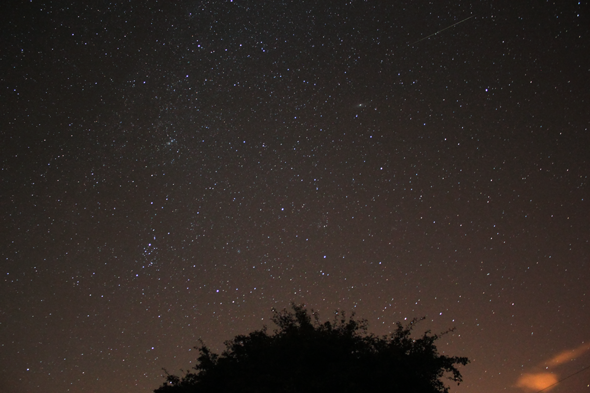 A spectacular Perseid fireball captured with a lens covered in dew! Credit: Will Gater A Perseid meteor falls through the constellations of Pegasus & Aquarius. Credit: Will Gater

Not a Perseid! A short sporadic meteor points the way (sort of) to M31. Credit: Will Gater

Despite the short nights, and often poor weather, the summer night skies offer some spectacular celestial sights. My favourite areas to observe at this time of year are the rich swathes of the Milky Way in Cygnus, Sagittarius and Scutum. These regions are packed with dense starfields, glowing emission nebulae and some of the night sky’s finest star clusters.

On Saturday I spent the evening on Dartmoor imaging these wonderful parts of the sky. I wanted to capture a large portion of them in each frame, so I used a 50mm prime lens on my unmodified Canon 550D DSLR, which itself was mounted on an HEQ5 Pro mount.

The first image below shows part of the Sagittarius, Scutum & Serpens region. Several Messier objects are visible in the frame, including: M8 (the Lagoon Nebula), M20 (the Trifid Nebula), M22, M17, M16 (The Eagle Nebula) and M24. The second shot shows a region of the Milky Way in the constellation of Cygnus. The red glow of the North America Nebula (NGC 7000) and the nebulosity around the star Sadr (right of centre) are apparent. You can also, just, make out the two main fragments of the Veil Nebula right on the very bottom edge of the frame. The shot with the silhouetted tree is a single 15-second exposure, at ISO 1600, with the lens wide open at f/1.8. 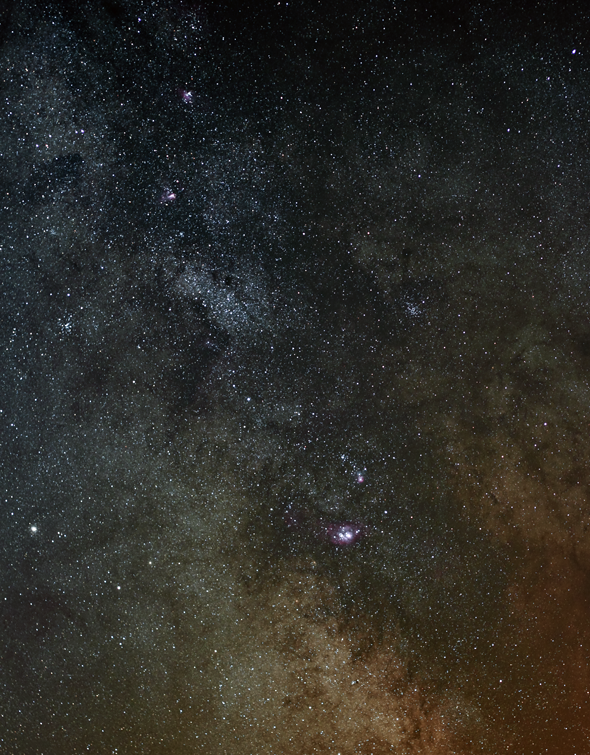 The Milky Way near the bright star Deneb (top) in Cygnus. Credit: Will Gater 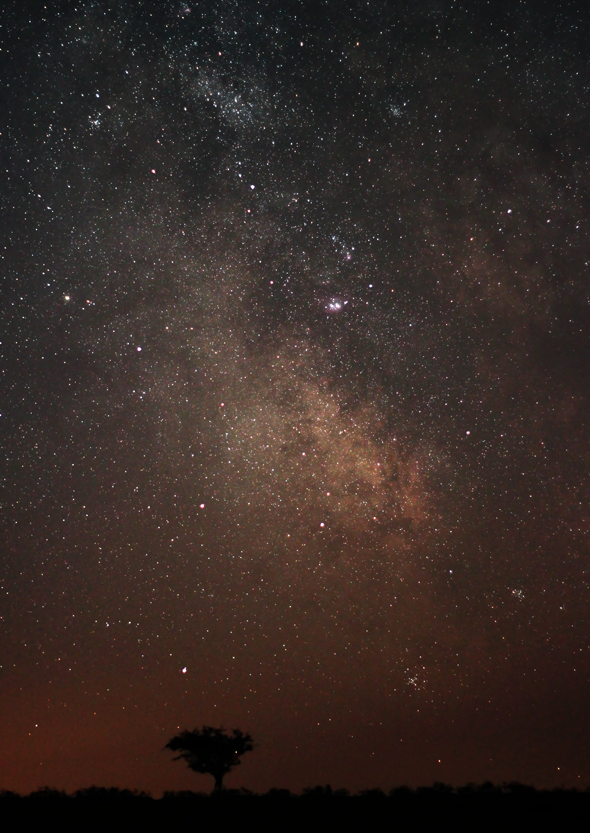 I’ll be speaking at the National Maritime Museum, in London, this coming Sunday as part of an event called ‘Envisioning the Universe’. The day will consist of talks, debates and discussions about the science and art of astrophotography. My fellow panellists include 2012 Turner Prize winner Elizabeth Price, author Elizabeth Kessler and Guardian art writer Jonathan Jones.

Over the last 12 months I’ve been working, in my spare time, on a short film about meteors. Called The Story of a Shooting Star it “follows the journey of a tiny grain of space dust, tracing its origins all the way back to the birth of the Solar System before exploring its final fleeting moments blazing across the night sky as a meteor”. Having spent a while scriptwriting and researching I recently started filming for the project.

In May I spent a fascinating day at the Norman Lockyer Observatory, in Devon, with the Solar, Planetary & Meteor group there learning about radio meteor detection. And this past weekend I filmed in the stunning surroundings of Dartmoor National Park. I’ll be posting occasional updates on the film (and hopefully some short clips too) here, but for now here are some pictures from the first few days of location shooting. 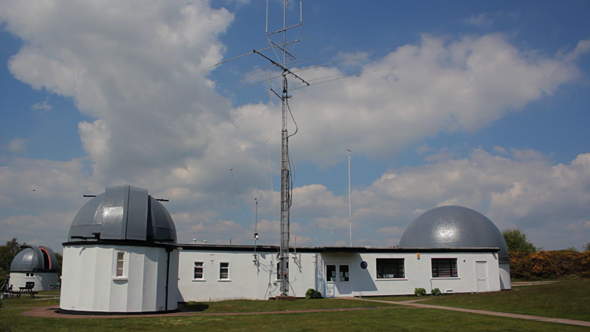 The Norman Lockyer Observatory on day one of filming. Credit: Will Gater

Ping! A meteor is detected vaporizing high up in our atmosphere. Credit: Will Gater

Twilight on Dartmoor, a truly stunning sight. Credit: Will Gater

Some serious peering going on in this shot. Credit: Will Gater 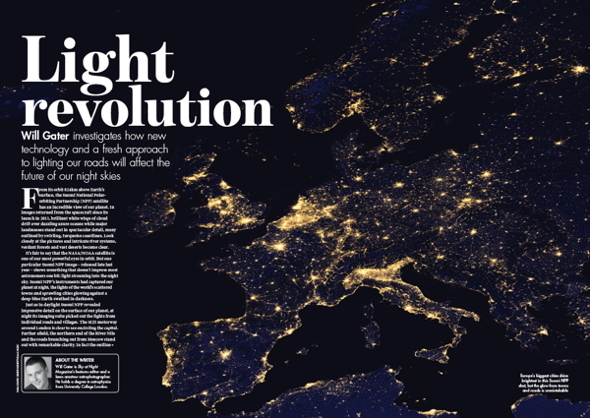 I have a new feature in the latest issue of Sky at Night Magazine all about light pollution and what the future might hold for our view of the night sky. Specifically, the piece explores recent changes in lighting practices and the rise of LED street lighting technology. You’ll find the article, called ‘Light revolution’, on pages 40-46 of the April issue, which is on sale now. 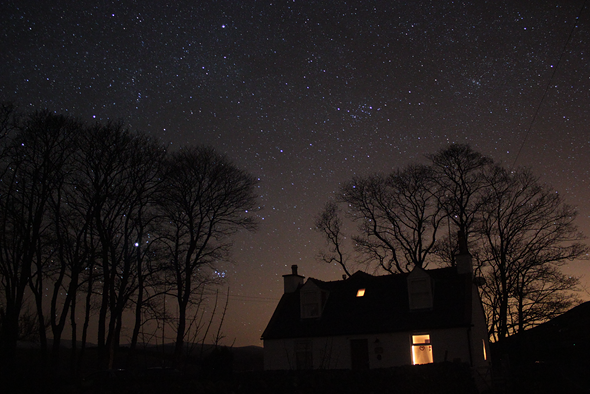 The night skies over the rural cottage where we stayed. Credit: Will Gater

I’ve just spent the last week staying very near to Galloway Forest Park, along with my wife and a few of our friends. I’ve been meaning to visit the forest ever since it was declared the UK’s first International Dark Sky Park back in 2009. The night skies were truly incredible and we were lucky enough to have 4.5 clear nights out of seven. I’ve put together a series of photographs below that show the astronomical highlights of our trip, including several sightings of Comet C/2011 L4 (PANSTARRS). If you’d like to find out more about Galloway Forest Park’s dark skies check out this page.

The Kirroughtree Visitor Centre is the site of a dark sky viewing area. Credit: Will Gater 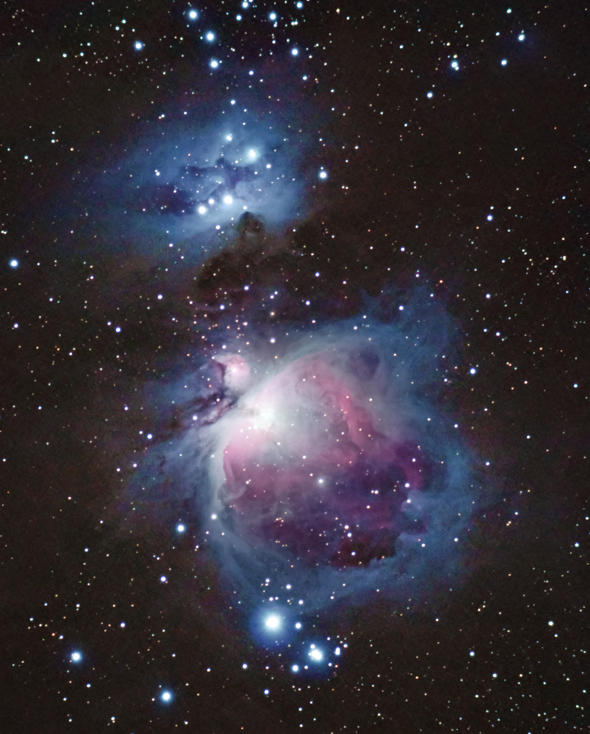 The Orion & Running Man Nebulae, imaged from just outside the forest. Credit: Will Gater

On Monday night we ventured into the forest to see the dark skies there. Credit: Will Gater

The zodiacal light was clear to see from near Clatteringshaws Loch. Credit: Will Gater

The trees in the forest appear to stretch toward the constellation of Leo. Credit: Will Gater

Orion, Jupiter & the Hyades and Pleiades over Clatteringshaws Loch. Credit: Will Gater 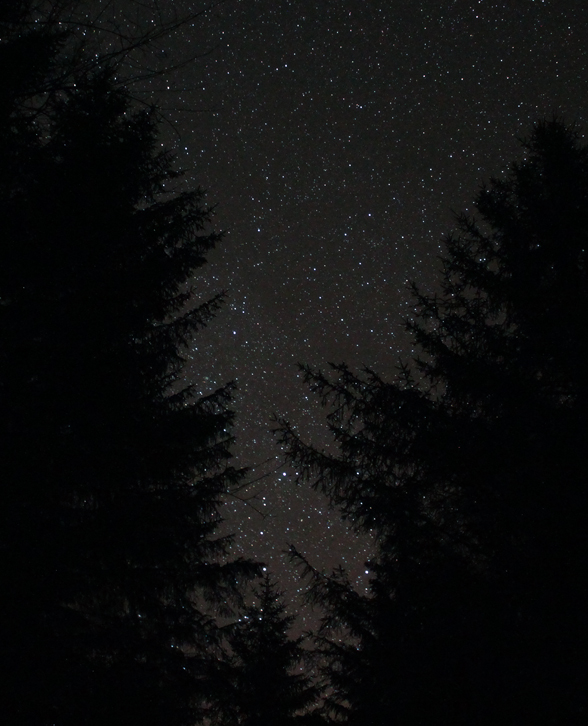 The Milky Way peeking through the trees was an unforgettable sight. Credit: Will Gater

Much of the time watching the comet was spent waiting for cloud gaps. Credit: Will Gater

The Earthshine-lit Moon, taken shortly after Comet PANSTARRS had set. Credit: Will Gater

Clouds move past the Earthshine-lit Moon later on in the evening. Credit: Will Gater 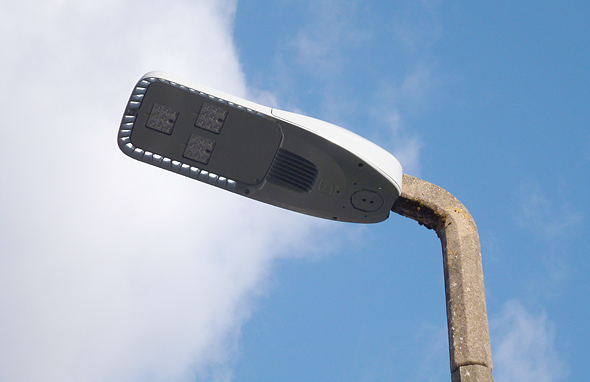 A modern LED streetlight in the town of New Galloway. Credit: Will Gater 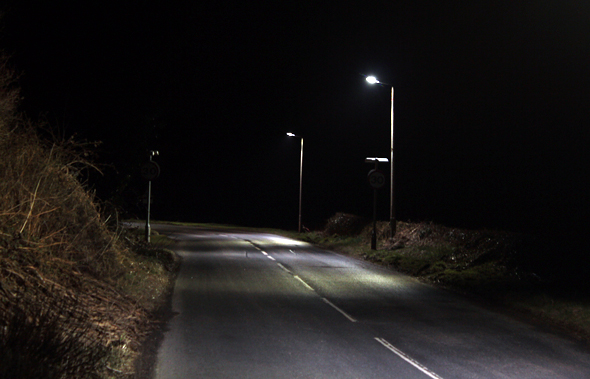 Very little light shines out the sides of the lights (great for astronomy). Credit: Will Gater

…but it soon set behind the distant hills. Credit: Will Gater

One Show presenter Lucy Siegle talks to Will live from the Brecon Beacons. Credit: BBC

I had great fun on Wednesday night in the Brecon Beacons filming a series of live segments about astrophotography for the BBC’s The One Show. The idea behind the evening was that I would help a group of twenty amateur photographers take their first images of the night sky before judging which was the best shot. When we arrived at the filming location the sky was filled with clouds, but as the Sun set the clouds thankfully dissipated and the photographers managed to capture their pictures (even despite some quite substantial haze).

If you missed the programme, and are in the UK, you’ve got a few days left to catch it on the BBC’s iPlayer; the astrophotography bits can be found here, here and here. And if you’ve captured an astro image lately that you’re particularly pleased with, don’t forget to send it into the 2013 Astronomy Photographer of the Year competition, which is now open for entries.

Over the last few nights we’ve had some clear skies and good seeing conditions here in the southwest of the UK. On Monday night I spent 3 hours capturing a 50 pane mosaic of the whole of the visible portion of the Moon while last night I decided to focus on the wonderfully rugged region around the lunar Alps and the crater Plato.

Both images are shown below – do click on them to see the full size versions, especially the whole-phase mosaic. They were captured with a Meade 8-inch LX200R Schmidt-Cassegrain telescope and an Imaging Source DMK21AU618.AS CCD camera; the Plato/lunar Alps image is a mosaic of 17 panes made using an additional 2x Barlow lens.

Crater Plato and the lunar Alps on 19 February 2013. Credit: Will Gater

Last week I was lucky enough to spend five days sailing up and down the Norwegian coast onboard the Hurtigruten ship MS Trollfjord. While I was on the trip, from Tromsø to Kirkenes and back again, there were several fine displays of the Northern Lights. Despite all the difficulties that arise when trying to photograph the night sky from a moving ship, I did manage to get a few shots of the lights, which I’ve posted below.

Ironically, the best display we saw — with several spectacular auroral coronae and countless multicoloured rays — appeared just as we docked in Tromsø at the end of our voyage, late on Wednesday night. So it seems fitting to start the picture collection with a shot from that display showing the aurora over Tromsø’s famous Arctic Cathedral.

Aurorae over the Arctic Cathedral. Credit: Will Gater 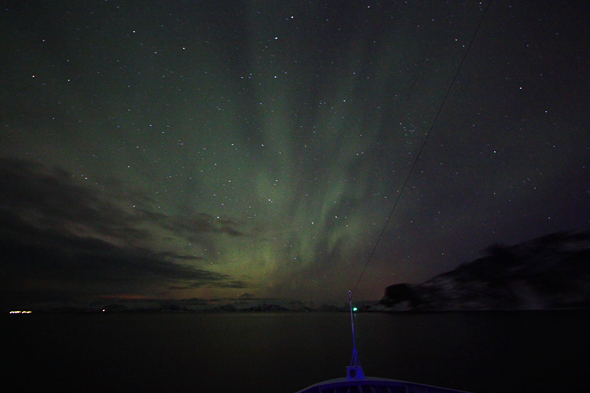 A faint auroral display over the bow of MS Trollfjord. Credit: Will Gater A bright and dynamic auroral corona near The Plough. Credit: Will Gater

Animation showing evolution of auroral coronae over about 2 minutes. Credit: Will Gater

A faint rayed auroral band over a fjord. Credit: Will Gater

A faint but extensive auroral display flutters over a fjord. Credit: Will Gater A bright rayed arc extending across a large swathe of sky. Credit: Will Gater 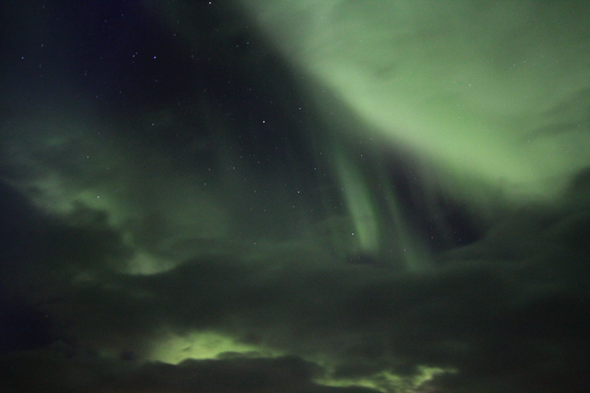 Bright auroral curtains shining through gaps in the clouds. Credit: Will Gater

A faint auroral band with signs of a few rays. Credit: Will Gater

Bright auroral rays dance against the constellations of Gemini & Cancer. Credit: Will Gater

A flame-like aurora (had to use my head to block some blue lights!). Credit: Will Gater 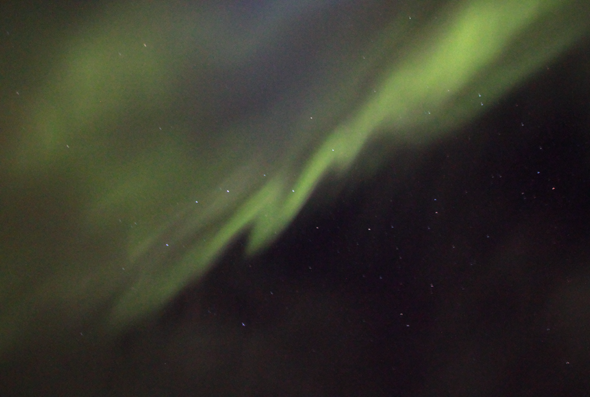 Auroral swirls near the magnetic zenith. Credit: Will Gater

Watching the show through some thin cloud. Credit: Will Gater 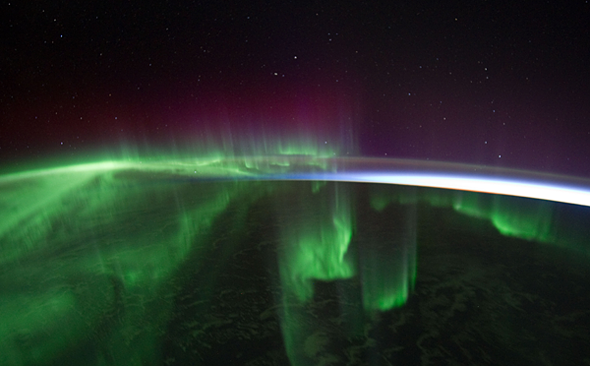 If you’ve ever gazed in wonder at some of the spectacular timelapses from the International Space Station, there’s a good chance it was captured by NASA astronaut Don Pettit. Don has photographed the Earth from space extensively during several missions to the space station. Late last year I spoke to him about one specific phenomenon that he’s imaged from orbit – the aurora. The interview has now been released by Sky at Night Magazine as a podcast and you can listen to it here, or with the audio player embedded below. And if you want to get a sense of what it’s like flying over the aurora, have a look at some of the stunning videos over at NASA’s Gateway to Astronaut Photography.