Just a quick heads up to say that I’ll be appearing at two exciting events this month. The first, next weekend, is the 2014 North West Astronomy Festival in Runcorn, Cheshire. I’ll be giving a talk on the Saturday (11 October) about the ‘Secrets of Celestial Light’. Here’s the flyer: 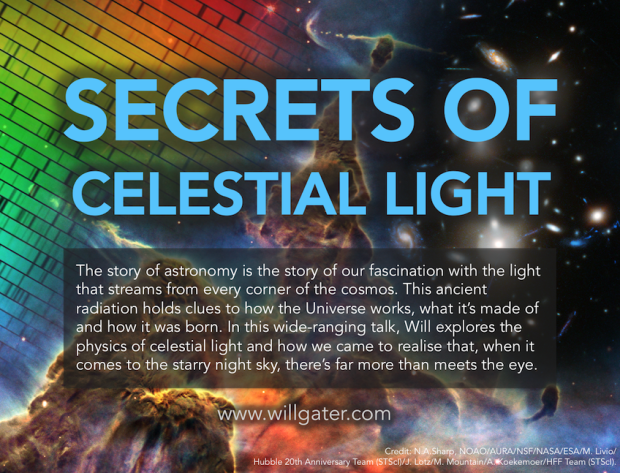 You can get tickets to my talk and the rest of the event – and see the full line-up for the weekend, which includes Damian Peach, Helen Keen and Jon Culshaw – at the festival website here. I’ll also be doing a book signing for the Knowledge Observatory on the Saturday afternoon if you’d like to pick up a copy of The Practical Astronomer or The Night Sky Month by Month.

The second event I’m appearing at this month is a theatre-based astronomy chat show called Tour of the Universe. This exciting new touring production is visiting the Nottingham Playhouse on the 20th of October and I’ll be the special guest of presenters Neil and Jane on the night. Tickets to the show can be booked through the Nottingham Playhouse box office or online here. 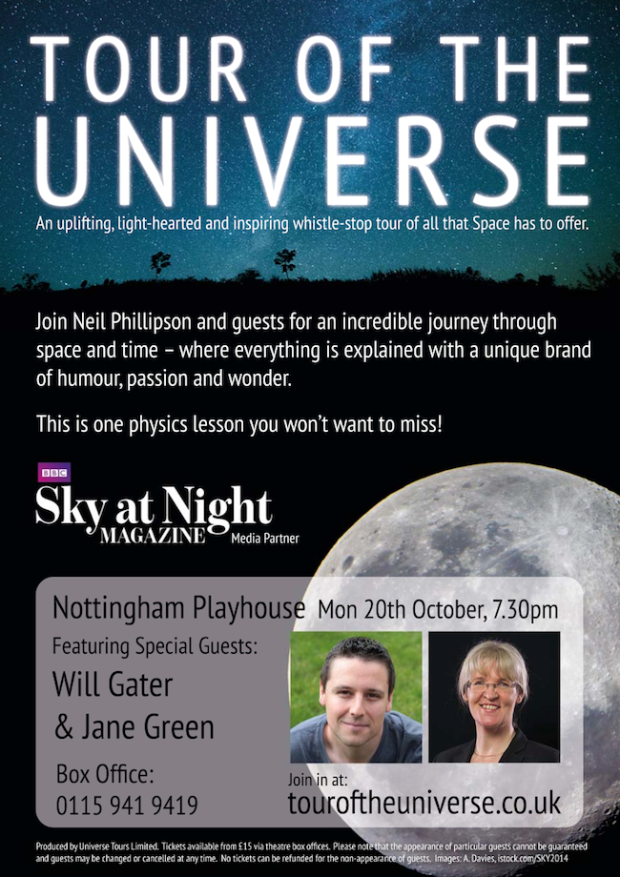 I’m delighted to be speaking at this year’s International Astronomy Show, which is being held at the Warwickshire Exhibition Centre on 7-8 June. I’ll be giving my talk ‘Alien worlds – the extraordinary inhabitants of the Milky Way’ at 10am on the Saturday; in it I explore how we’ve discovered nearly 2000 extrasolar planets in our Galaxy and look to the future and what astronomers hope to find in the coming years. Last year’s show was a huge success and it was great to catch up with old friends and meet many new ones too. If you’re an amateur astronomer in the UK, this is one event you won’t want to miss.

I’ll be speaking at the National Maritime Museum, in London, this coming Sunday as part of an event called ‘Envisioning the Universe’. The day will consist of talks, debates and discussions about the science and art of astrophotography. My fellow panellists include 2012 Turner Prize winner Elizabeth Price, author Elizabeth Kessler and Guardian art writer Jonathan Jones.

I’m very pleased to report that as well as next month’s talk at the South West Astronomy Fair, I will now be giving two more talks this year. One is to the Cardiff Astronomical Society on Thursday 17th September and the other will be to the Torbay Astronomical Society on Thursday 15th October. The talks will be about my new book The Cosmic Keyhole and will cover some of the topics in it — ranging from extrasolar planets to the mysteries of Saturn’s largest moon. For further updates don’t forget to follow my Twitter feed.

For any of you reading the blog who came to my Hubble talk last night, hello! As promised here are a few select links to some of the videos from the presentation. First up is a zoom into the Hubble Ultra Deep Field.

Next is a pair of videos showing the creation of the stunning Cat’s Eye nebula – first the companion star dies creating the concentric shells of material, then the jets and magnetic field of the other (alive) star warp and twist into the nebula to create the central detail and swirls. The first part is here and the second you’ll find by clicking here.

Lastly then is a video of the bizarre object called V838 Monocerotis. You can download the video by clicking here. And remember that you can see more videos and (almost) all of the images from my talk on the ESA Hubble website here – www.spacetelescope.org.

On Monday (13th October) I will be giving my final Hubble talk of the year to the West of London Astronomical Society (WOLAS). It will be, once again, entitled “Not just pretty pictures – the science behind Hubble’s greatest images”. The society has written a nice synopsis of the background of the talk, on their meetings page here.

What are these (different) things coming out of this cloud? Come to my lecture to find out! Credit: NASA and Jeff Hester (Arizona State University)

I’ve really enjoyed giving this particular talk this year however I’m going to be busy working on something else for the next few months, so this will be my last one for a bit. For now though if you are interested in coming along to the WOLAS meet-up here’s a map to Christ Church, Redford Way, Uxbridge where the meeting is being held.

I’ve had several emails, in the last two weeks or so, asking when Mars is going to appear the size of the Full Moon this August. I was going to post something up about this, however it seems Phil has been asked about it too. So I’ll leave the Bad Astronomer himself to debunk it, but in short this is absolutely not true and will not happen. It’s an email/Internet hoax that has been going around the Internet for the last few years. Unfortunately it seems to rear its ugly head every August.

Mars’s mean distance from the Earth is about 225 million kilometres meaning that even through a powerful amateur telescope it will only appear as a disc showing (at best) the polar ice caps and a few dark surface markings. At the moment Mars is not well placed for viewing as it’s far too close to the Sun (as seen from Earth). As the Earth and Mars travel through their orbits around the Sun, the distance between the two planets changes dramatically. So some years Mars does come closer to us and telescopic views do show it much better at these times than others. Yet even at its closest (56 million km) it only appears with the naked eye as a bright ‘star’ with a ruddy tint, certainly nothing like the diameter of the Moon which is a mere 380,000 km from Earth.

Anyway on to much more sensible things – like a reminder of the talks I will be giving in the next few weeks! On the 2nd September I will be talking at the Wiltshire Astronomical Society, details are here. So if you are in the region come along and say hello. I will be giving my talk on the science behind Hubble’s greatest images entitled “Not just pretty pictures”. Then on Saturday 6th September I will be giving a lecture (starting at 2:45 pm) at the 2008 Herstmonceux Astronomy Festival, again with the my talk on the science in Hubble’s images. You can find out about the festival here as well as information on the main Saturday lectures here.

Finally then a bit of random book news. Yesterday I finished editing the manuscript and tomorrow will be sending off my final draft of the book to the publisher’s in New York. It’s quite exciting for me, as the next time I see it it will probably be in the form of the galley proofs. Lastly (I mean it this time) If you’re in the shops this week the new issue of Sky At Night magazine is out. You can read my cover feature on “The Next Supernova”, to see which Milky Way star astronomers think might be next to go supernova.

I will be giving a talk on the Hubble Space Telescope to the Bristol Astronomical Society this Friday at 7:15pm. It’s being held at Bristol Grammar School and members of the public are welcome to come along. For more information please visit the BAS website.

I’m very pleased to announce that I will be giving a talk at this year’s Herstmonceux Astronomy Festival, held at the famous Herstmonceux observatory in Sussex. The subject of my talk will be the science behind the Hubble Space Telescope’s greatest images. To find out more about the festival, which will be held on the 5th, 6th and 7th of September, visit the Observatory Science Centre’s website here.

Just a reminder to those of you in the south-west UK that on Thursday evening ( 20.03.08 ) I will be giving a lecture to the Torbay Astronomical Society. The title of the talk is “Not just pretty pictures – the science behind Hubble’s greatest images”.

All are welcome and the talk starts at around 7:30pm at Torquay Boys’ Grammar School. For information on how to get there and visitor fees see the TAS website.