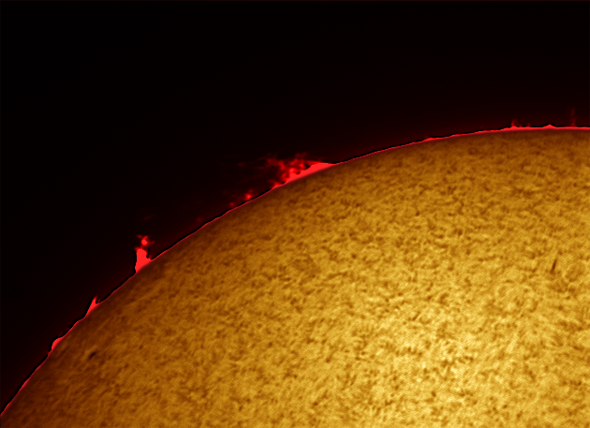 Prominences leaping from the limb of the Sun on 11 May 2012. Credit: Will Gater

It was hard to decide where on the Sun to look first yesterday with all the activity that was going on. AR1476 was, of course, taking centre stage but there were also numerous filaments scattered over the disc, while around the limb there were several impressive prominences.

I managed to capture a few pictures of what was going on, but sadly the seeing conditions were poor and so the detail in the images isn’t very good.

The picture above and the first two pictures below were taken with an Imaging Source DMK 21AU618.AS CCD camera (shooting at 60FPS), a 2x Barlow lens and a Coronado PST hydrogen-alpha filtered telescope. The last image was taken with the DMK 21AU618.AS on an ETX90EC OTA fitted with a white-light solar filter. 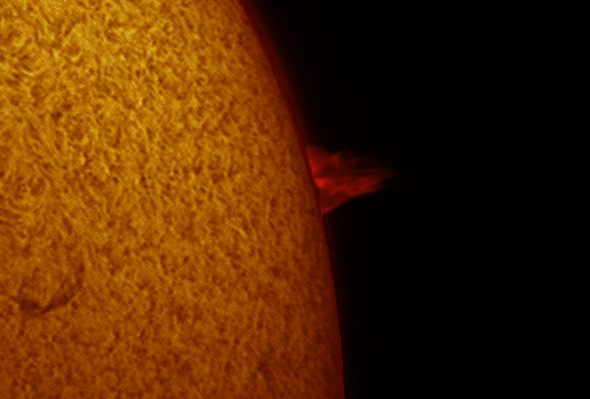 A large prominence extends above the solar limb. Credit: Will Gater 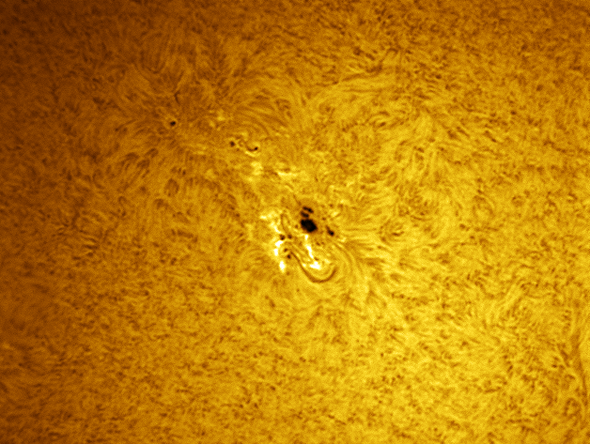 A word of warning: never point an unfiltered telescope, unfiltered pair of binoculars etc. at the Sun. You will damage your eyes and almost certainly blind yourself. If you want to observe the Sun only use specialist certified solar filters that have been fitted correctly (and thoroughly checked) and that have been purchased from a reputable astronomical supplier. Be sure to follow any usage instructions carefully. Finderscopes etc. should also be filtered or removed.

I blogged a few months ago about an art exhibit, which I saw here in Bristol, about the Sun and magnetic fields. You can see what I thought of them here. Well (via Phil Plait) it seems they have now uploaded those films onto the web. The two films are both innovative, interesting and most of all educating. They’re called Brilliant Noise and Magnetic Movie and they are really worth watching.

Yesterday a few of us from the magazine went to see the Brilliant Noise exhibit at the Arnolfini gallery here in Bristol. The exhibit is based around a 5 month placement of two artists at NASA’s Space Sciences Laboratory at the UC Berkeley.

I won’t give away all the detail but the exhibit uses raw videos of the Sun (from various solar spacecraft) followed by some interviews, on the big scientific quandaries, with scientists from NASA.

I haven’t seen science portrayed so well, in art, for a long time — the exhibit is well worth a visit. The power of the Sun, its magnetic field and the turbulent nature of its surface and atmosphere was conveyed with incredible power and real feeling. If you are Bristol way then I definitely recommend you pop in.